One of the more beautiful graphic novels I’ve read is Asterios Polyp by David Mazzucchelli (2009). The story follows Asterios, a self-centered “paper architect” (his designs have never been produced) and his transformation after a fire burns down his swanky New York apartment. Divorced, alone and devoid of possessions, Asterios hops on a Greyhound bus to the small town of Apogee, the farthest place his money will take him. Throughout the book, the reader is thrust back and forth between memories of his relationship with his ex-wife, his theories on life and design, and the present. At times, the story is narrated by his unborn twin brother Ignazio, who haunts Asterio, and even visits him in Apogee.

As such, the main story line comes in and out of focus, making it more of a challenge for the reader, but in many regards, this non-linear storytelling speaks far more clearly to the human experience than something less complex would. In one scene, Asterios hands a lighter to a man on the bus: “It used to be my father’s”. This is immediately followed by a quick shot of his father, the way he remembers him: young, healthy, lighting the cigarette as his wife hands him a cup of coffee. The image is then immediately followed by a shot of his father, at the end of his life, wrinkled, barely recognizable, in the same position, being spoon-fed soup by his wife who has also aged. The scene then reverts back to the conversation on the bus.

In the jumble, Mazzucchelli manages to create a sort of universal human language about love and loss that intertwines memory, symbols, images, truths and reinventions. It’s raw and truly beautiful. 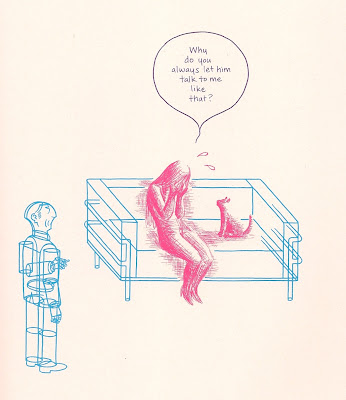 This cluttered storytelling is antithetical to the main character’s obsession with the dual nature of all things: “Duality is rooted in nature: the brain is divided into right and left hemispheres, electrical current is either positive or negative – our very existence is the result of humans being male and female. It’s yin and yang”.

But of course, life’s more complicated than that… or as his friend puts it: “There are two kinds of people in the world – those who break things into two kinds and those who don’t”. It isn’t until Asterios moves past the rigidity of his beliefs, and effectively stops believing he’s God, as Mazzuchelli puts it, that he finally grows up, and becomes a real person. Much like his drawings, perfect on paper but unachievable in 3-D , his theories don’t stand up in the real world and are what prevent him from being a truly feeling and “real” person.

Mazzucchelli’s drawings throughout are similarly complex, shifting styles depending on the narrator, or the memory sequence. Asterios takes on a more geometric form when his life “influences someone else’s” directly, for example. There are two beautiful streams of consciousness near the end of the book – snapshots of details of his ex-wife (the way she slurps her soup, laughs, cuts her hair…) followed by a darker dream sequence. Both are stylistically completely different from the rest of the book and show off Mazuchelli’s artistic range and talent. He can seemingly draw it all. (As a tiny example, see how different each character is in the image below, where Asterios and his wife first meet). Image from www.page45.com (by David Mazzucchelli)

All in all, it’s a lovely story that’s told with a vulnerability that feels like it’s coming from a knowing place. Throughout, the reader is invited to grapple with Asterios’ story in the same way we do our own lives and our relationships to work, ambition, others and ourselves. We can make sense of it in bits, and at different moments or points. As I write this, I’m not even sure I have understood it all, realizing that the conclusions I’m drawing now will probably be very different at other times in my life. For all the nostalgics out there, I recommend a read and a re-read.

Excerpts of the book can be found here: http://documents.nytimes.com/excerpt-asterios-polyp#p=1