A Conversation with Ashok Kumar 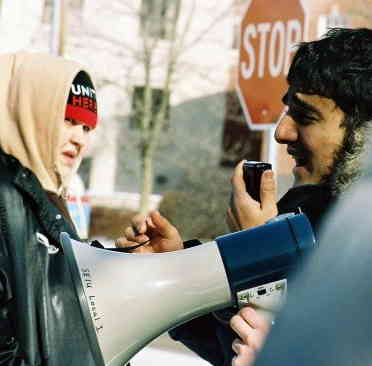 From 2006 to 2008, at the tiny age of 22, Ashok Kumar served as a Supervisor of Dane County, in Madison, Wisconsin.  He was endorsed by both the Greens and the Socialists and managed to pass some pretty fantastic stuff.  He’s a great storyteller, and despite his heavy hittin’ background, he’s not as serious as he sounds!  Today he’s a fellow student at the London School of Economics, where I interviewed him for my column, Really Serious Things.

The theme for our blog is “Flipping the script,” so we are telling stories of people taking back the city and rethinking who the city is for and what it looks like.  You, Ashok Kumar, are someone who has done that.  Let’s start with the legislation you passed in Wisconsin, tell us about that.

That’s interesting.  I guess as an activist who was able to wiggle his way into public office I was trying to ‘flip the script’, but I never thought about it that way.

Our election campaign was always about harnessing the collective power of peoples’ movements within Dane County to assist in shifting the power relations.  And if some good policy came out of it, great! But that wasn’t the goal.  The policies we chose to fight for were always about localizing struggles as well as addressing community concerns in their own right.

From the beginning our relative success came as a result of me not running as a Democrat.  Ours was a district where it was still possible to win even if you ran to the left of the Democrats. It’s not intrinsically problematic to be a Democrat, but it’s usually difficult to affect change if you do since you owe your success to the party in power along with those vested interests that support that party.  In running as an insurgent third-party candidate, I was able to continue this adversarial role while in office.

Two weeks after my election there were 25,000 people marching for immigrants’ rights in Downtown Madison.  Out of this national fight for immigrants’ rights, we worked with community organizations to institute full housing protections for undocumented immigrants. We ran a campaign for the county to offer id-cards for the undocumented, and organized immigrants and allies against a racist sheriff who targeted immigrants despite us passing a sanctuary law which made it illegal for county sheriff’s deputies to enforce or assist with federal law enforcement of immigration laws.

This was our model.  Gauge where the community stood and work in solidarity on policies that built power as well as win concessionary demands.

A few other examples of policy campaigns include the ending of Section 8 housing discrimination.  This was a campaign that low-income, mostly black, community organizations had organized without avail for over a decade, against racist landlords who refused to accept Section 8 vouchers and had led to a systemic ghettoization of ‘Section 8ers’ as they were called.  Our law made it illegal for landlords to refuse these vouchers, and doubled the housing options for over 3,000 low-income families on Section 8 housing assistance.

Other laws included permanently ending millions of dollars in public and private jail profiteering, an outgrowth of years-long campaigns by the urban churches of Dane County. We also passed a law making it illegal for the county to contract with violators of labor laws, which coincided with long-standing campaigns taking place by the labor unions UNITE-HERE and SEIU who were organizing low-income laundry and janitorial workers at the time.

Ear to the Ground

Laws included expanding full housing rights to transgender people and people with criminal records that passed as a result of these communities directly confronting do-nothing supervisors. We also recognized Columbus Day as Indigenous Peoples’ Day because Wunk Sheek and other Indian organizations demanded it, which created quite a stir on right-wing radio.  My point is that policy-making is about keeping your ear to the ground and responding appropriately, not seeing yourself as the torchbearer.

Another big campaign that was taking place simultaneously in many states at the time, including Wisconsin, was “vote no” on the marriage amendment–campaign.  We lost.  After so much organizing the results were devastating to many who had organized tirelessly around the issue. Following this, I wrote the Dane County Equal Benefits Ordinance, which required all contractors and subcontractors of the county to recognize domestic partnerships as equivalent to marital benefits.  This affected thousands of Dane County businesses and workers.  The organizing around the law was more about peoples’ ability to not be demoralized after such a mammoth campaign at the state-level.  Winning can sometimes serve that purpose, and provide the necessary short-term fuel to continue struggling. People organized and the law passed.  It was the strongest most expansive domestic partnership law in the country and has been used as model-legislation in a number of cities and counties around the country.

The last law I was able to pass was the sister-agreement with Andres Eloy Blanco Municipality, Venezuela.  Many saw this as a shout-out to my people on the left, but I and others who I organized with saw it as more representative of our broader internationalist philosophy.  I don’t want it to seem as if the solution is to work on electoral campaigns and pass a bunch of laws.  It’s about something bigger, more structural.  The sister agreement was about building solidarity ties with similarly minded communities in the Global South.  It was about learning from their struggles and looking at our own =

Legislating from the Movement Up

All in all I was able to write and pass over a dozen laws because of the social movements that these laws were bound with.  This will also result in their actual enforcement, unlike many laws that pass through backroom deals.  The fact that people of color, working class people, women, LGBT and other historically marginalized people organized and forced the power structure to recognize their humanity serves a multiplicity of purposes, most important of which is the collective knowledge within these communities that hegemony is socially constructed and organizing is the key to winning.

Ultimately, I think, many in the community concretized the idea that real democracy takes place in the streets, not on the legislative floor. The latter is just a tool for organizing the former; we’re taught it’s the other way around.  In that sense, I think we were able to ‘flip the script’, at least just a bit for people in Dane County, when it comes to the narrative sold by the power structure, and internalized by us, about what’s actually possible in our communities.

Related to that actually, there is an article about you which describes your “philosophy as a politician” which is you saw yourself as “an extension of Dane County’s social movements, the real agent of progressive change.” I really like that. It’s so rare, so refreshing…

Well yes, although this might be ‘flipping the script’ on conventional notions of what’s possible within representative government I don’t think this is necessarily ‘the model’.  You have to consider the demographics of my district and Madison in general.  Dane County is the second largest county in Wisconsin after Milwaukee.  I represented Downtown Madison, arguably one of the most progressive districts in the country.  Even though I ran with the Green Party, almost every union – with the exception of the sheriff’s deputies union – supported me.  That isn’t normal in other areas around the country.

Taking the Streets into the Supervisors’ Chambers

Even though I ran in the most contested election in the county, against two Democrats and a Republican, I was still supported by the Sierra Club and the National Organization for Women.  This doesn’t happen in most places.  Nonetheless, although Madison is progressive, the same cannot be said for the other 64 cities, towns, and villages that make up Dane County.  Before I was elected my supporters and I had been organizers in campaigns that involved building occupations, hunger strikes, and other forms of direct action.  We modeled our county campaigns around a similar strategy.  Through marches, direct confrontation, public shaming, ‘packing meetings’, and targeting financial support our campaigns were able to bring reluctant Supervisors kicking and screaming to our side.

This also led to a barrage of media criticism from radio to print to the blogosphere about our ‘tactics’.  I don’t know what I can say about that… maybe we could have been a bit more tactful about what we said and did, but I just think that the media in most places in America sucks, that’s all.  Plus many of these operate at the behest of powerful interests that we were confronting on a daily basis.  They served the interests of the chamber of commerce, apartments association, builders, realtors and others who felt genuinely threatened by movements and progressives in power.

Yes you did come across harsh critics along the way, but you did great work! You put a spin on politics-as-we-know-it in the U.S., by not using the usual “my hands were tied” cop out plus you gave people a platform on which to be heard, to elevate their struggles which in turn brought about legislation that is completely outside of the “leftist” gamut of “things that can be done in our communities”. You guys rocked! Any closing remarks on collective action/organizing/coalition building…

Hey thanks!  All three of those are key components to not just ‘winning the policy’ but building capacity for movements.  Progressives in power need to see that as their role.  It’s about building infrastructure for the long haul.  For example, if you get elected in a place that doesn’t have much movement culture, work to pass a law that eases the rights of workers to organize rather than a budget amendment for a Purchase of Service Agency.  Put your energy where it is most effective.  The latter may help a few people, but the former builds capacity for movements to develop in the future.  That’s just one example, but I think you see what I’m getting at.

In Dane County, we had the worst black-to-white disparate incarceration rate in the country.  The black community of Madison has been organizing around issues of racist policing for decades.  The newer immigrant organizing also targeted the sheriff department’s policies.  In seeing the intersectionality of these issues and one common target these movements were able to coalition and make gains in ways that aren’t normally possible.  The white power structure pits low-income communities of color against each other, fighting over limited housing, social services, and resources – the crumbs.  The best use of local policy campaigns is as a tool to highlight the intersectionality of our movements, which will build lasting alliances between these communities.  In looking at local elections and policy campaigns I think people on the movement-left should see the value of them, ultimately, as tools for political education.  So, my point is that the victory is in the struggle. …but actually winning some demands sometimes is good too.

A guy at the water cooler: Ashok Kumar talks about being socialist in public office